If you don’t list a debt in your bankruptcy case and don’t add it on time, it may not be written off.  So carefully list all creditors that you owe money to. 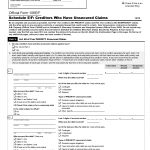 You can’t pick and choose which debts to include in your bankruptcy case. The U.S. Bankruptcy Code says that the first duty of a bankruptcy debtor is to provide “a list of creditors.” Section 521(a)(1) of Bankruptcy Code. That list includes secured, priority, and unsecured debts, which you put on Schedules D, E and F, respectively. As these Official Forms state clearly, you must

In the Declarations page, you declare “Under penalty of perjury” that the “schedules filed with this declaration… are true and correct.” That page includes the very stern warning that “Making a false statement … can result in fines up to $250,000, in imprisonment for up to 20 years, or both.”

Truthfully, that is an overly stern warning because penalties like that rarely happen in the consumer bankruptcy context. Not for not including a debt!

The point is that it’s a federal crime to lie on your bankruptcy documents intentionally. So you need to list all your debts. Talk with your Kalispell bankruptcy attorney if you believe you have a reason for not including a debt. There’s usually a practical solution to your concerns.

Unlisted Debts Not Written Off

Today’s blog post is not so much about intentionally not listing a debt but doing so inadvertently. If somehow you don’t include a debt in your bankruptcy schedules you risk owing that debt after your case is over.

In the last five weeks we’ve covered the following categories of debts not written off in bankruptcy:

Debts “neither listed nor scheduled” in a debtor’s bankruptcy documents are another category of debts not written off. Section 523(a)(3) of the Bankruptcy Code.

If You Forgot a Debt

If you do not include debt in the schedules filed by your bankruptcy lawyer, you can often add it later. But you may need to act quickly.

Figuring out your deadline to add a missing creditor is somewhat tricky. It depends on the nature of the debt and the nature of your case.

The Deadline(s) to Add a Debt

First, if the debt is of the kind that the creditor could object to based on specific actions by you (for example, lying about your financial situation to acquire the debt), then there is a short, strict deadline. You have to add the debt to the case in time for the creditor to have time to object.  The objection deadline is usually about 3 months after you file your petition. So you’d have to add the debt a bit before that. Section 523(a)(3)(B) of the Bankruptcy Code.

Second, if your case allows the creditors to get paid something through your bankruptcy case, you have a different deadline to add debt. Most Chapter 7 “straight bankruptcy” cases don’t give most creditors the right to receive anything from the case. There are no assets to distribute to creditors (when all a debtor’s assets are “exempt,” or protected). If there ARE assets to distribute (because some asset(s) are not exempt), the bankruptcy clerk sends out a notice providing a deadline for creditors to ask for a share of the assets. Creditors do so by filing a “proof of claim” documenting their debt. So in this situation, you have to add a debt a bit before that deadline. Section 523(a)(3)(A) of the Bankruptcy Code.

In Chapter 13 “adjustment of debts” cases usually, the debtor pays some portion of most or debts. Within a couple of weeks after you file a Chapter 13 case, the clerk sends out a notice giving creditors a deadline to file proofs of claim. You have to add a debt a bit before that deadline.

What if you may owe a debt but don’t know that you may? For example, someone thinks you’ve caused them some injury or damages but hasn’t told you yet.

Or what if you’ve lost track of a debt or debts because you’ve moved and lost your records? If the debt is not on your credit report, you may have no way to recall and list the debt. Can you write off this debt?

Also, does it matter if a creditor has somehow found out about your case even though you neglected to list the debt?

Finally, what if the debt has been sold from one debt collector to another without your knowledge? How can you list a debt to successfully write it off if you don’t know who you owe?

We’ll cover these other scenarios next week.

Crucial Question: How Much Do You Pay to Your Creditors in a Chapter 13 Case?

Crucial Question: What Unexpected Creditors Should I Include in My Bankruptcy Case?

Making Sense of Bankruptcy: How Filing a Chapter 7 or 13 Case Stops Creditors’ Actions against You

Potentially Pay Nothing to Most Creditors in Chapter 13